The hike to the summit of 233m Mt. Inari-san and the pilgrimage circle around the shrines near the top is one of the most interesting short walks around Kyoto. It’s also the best way to see all of Fushima-Inari Taisha Shrine. 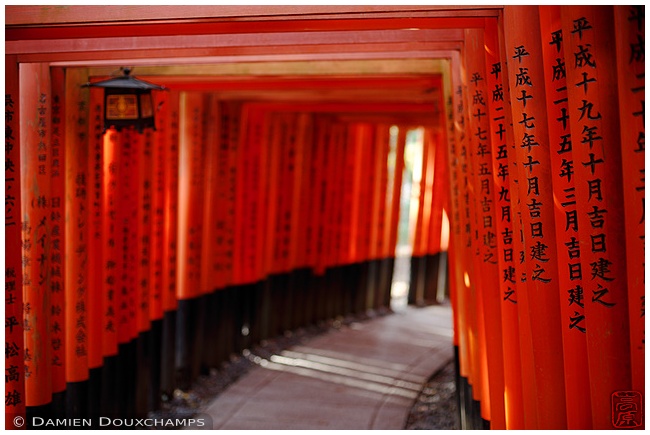 If you’re looking for an easy hike in the hills around Kyoto, and don’t want to spend too much energy or time getting there, then this Fushimi-Inari pilgrimage hike is a great choice. It starts at Keihan Fushimi-Inari Station or JR Inari Station, both of which are only a few minutes south of central Kyoto by train. The hike involves a bit of stair climbing, but if you take it slow, it’s not too strenuous. For much of the hike, you’ll be passing through hypnotic arcades of vermillion torii (Shinto shrine gates). And you’ll pass various shrines and subshrines along the route. And, at one point, you’ll be treated to an incredible view across all of southern Kyoto.

Just be warned: Fushimi-Inari-Taisha is one of the most popular sights in Kyoto. It’s especially popular with large groups of mainland Chinese tourists. This means that the area around the main hall and the lower trails can be very crowded. If you’re averse to crowds, go early on a weekday morning. But, whenever you go, rest assured that you’ll leave most of the crowds behind as you ascend the mountain.

First, before describing the hike, here’s some information on the torii (Shinto shrine gates) that you’ll be seeing so much of on the mountain: 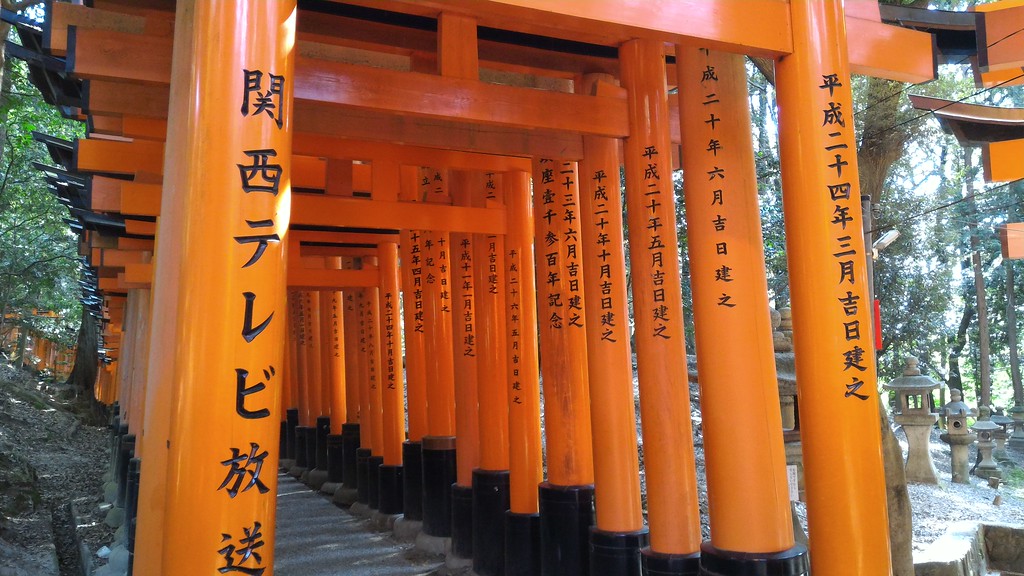 On the reverse side of the torii, you will see two kanji: 奉納. These mean “donated” or “offered” and are pronounced “hounou.” They’re read right to left.

Oh, and one more thing: Fushimi-Inari-Taisha enshrines the god Inari, which is the god of the rice harvest, commerce and business. The messenger of the god Inari is the fox. You will see fox images all over the shrine. They sometimes have a key in their mouth, which represents the key to the rice storehouse in ancient times.

Okay, so here’s the route:

Take a train to Fushimi. If you’re coming from somewhere on the east side, take the Keihan Line (from Demachiyanagi, Sanjo, Shijo or Shichijo) and get off at Keihan Fushimi-Inari Station.

As soon as you exit the station, you will find handy maps of the area on offer. Note that the maps are flipped north to south, so they’re a little confusing. 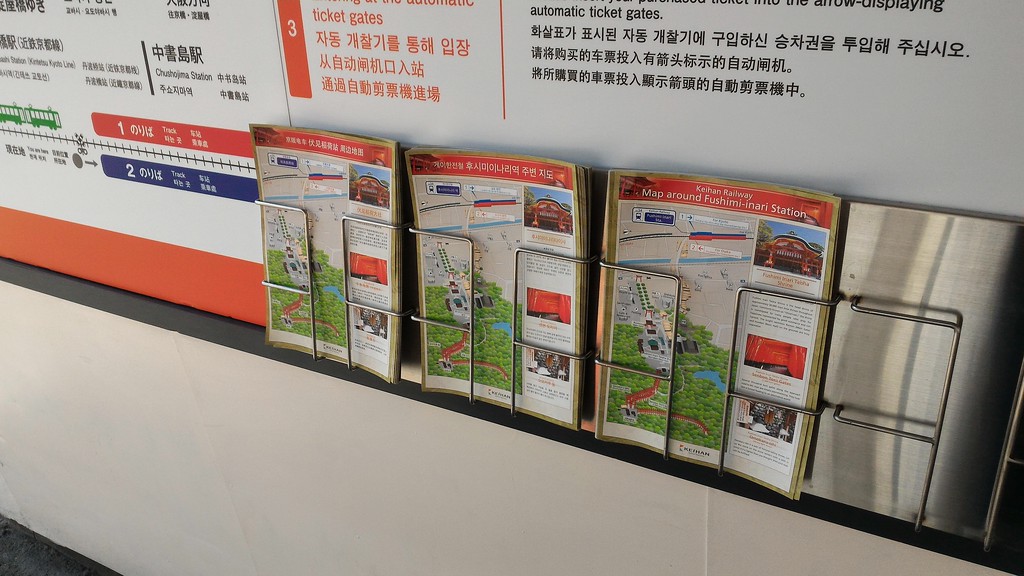 The way is clearly marked from the station. You walk out of the station, take a left and walk up the hill, crossing the JR tracks. Usually, you can just follow the crowd. 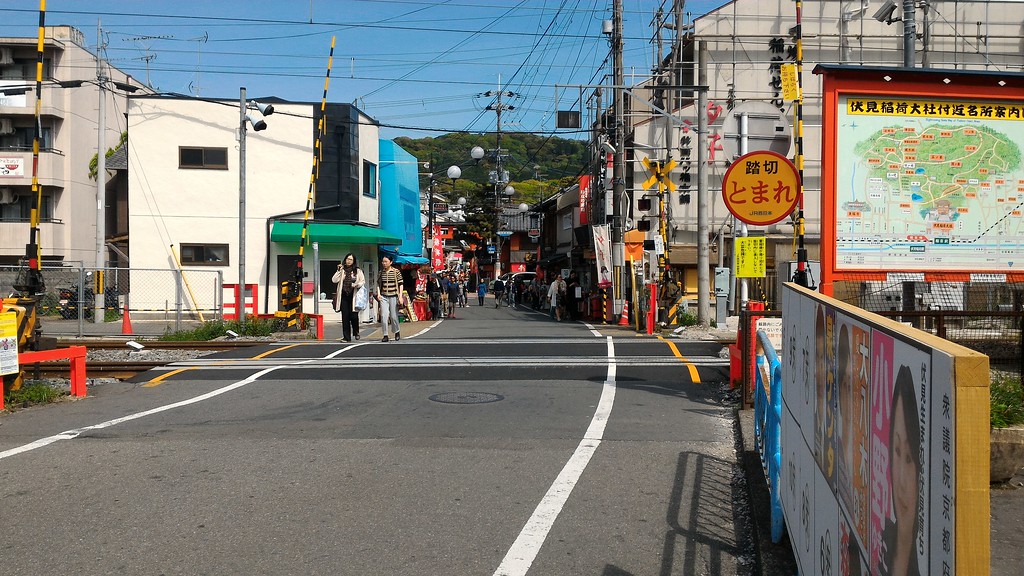 After crossing one relatively major street, you will see the first torii of the shrine. Walk up through this and you’ll shortly get to the main precinct of the shrine. 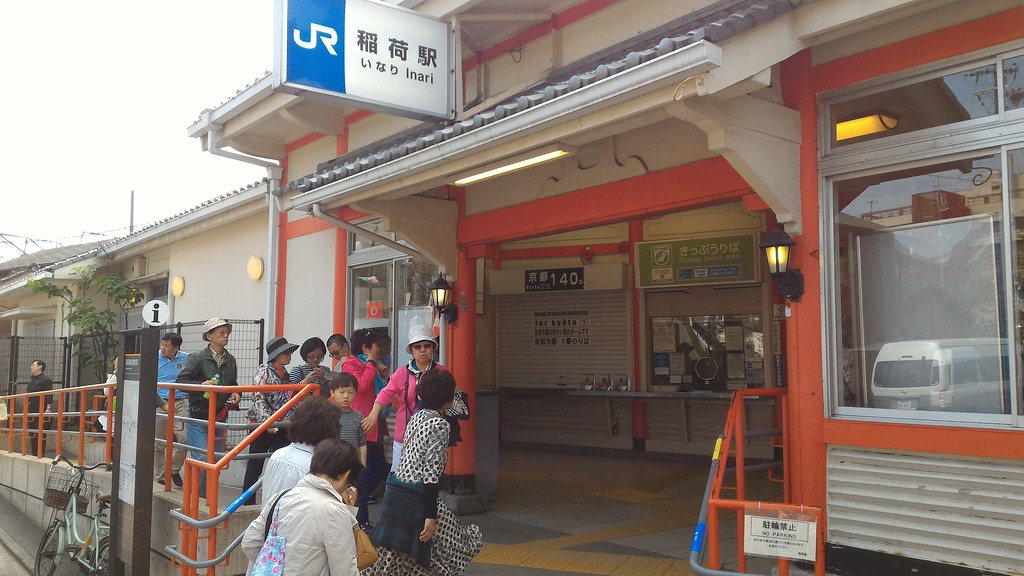 As soon as you exit Inari Station, you will see the first main torii of the shrine. Follow the crowds up the hill. 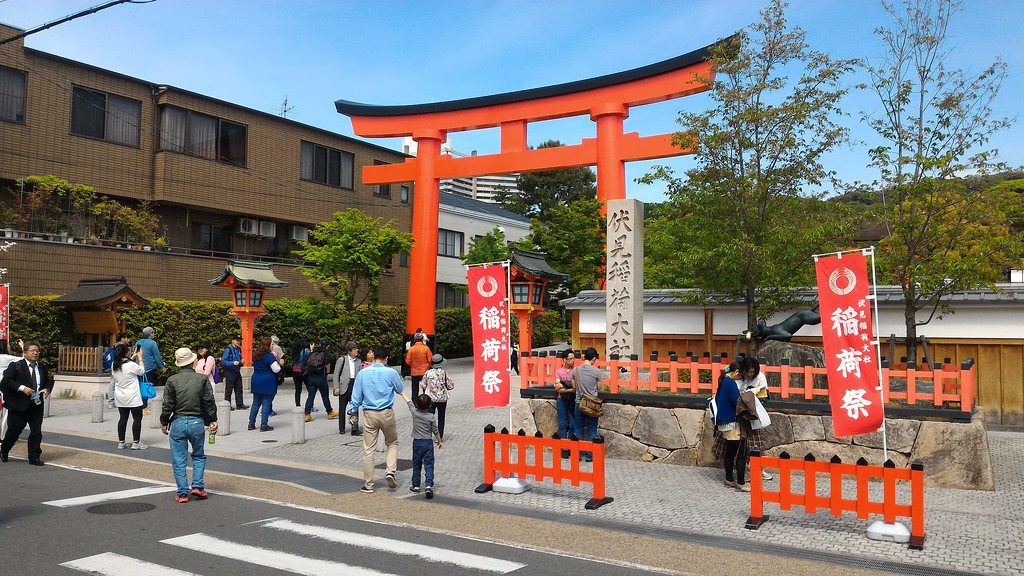 The main approach to the shrine is impressive, as the vermillion gates rise up in front of you.

Climb the steps and enter the main precinct of the shrine via the stunning main gate.

After passing through the main gate, you will see the dance stage where the shrine maidens perform during yearly rituals. 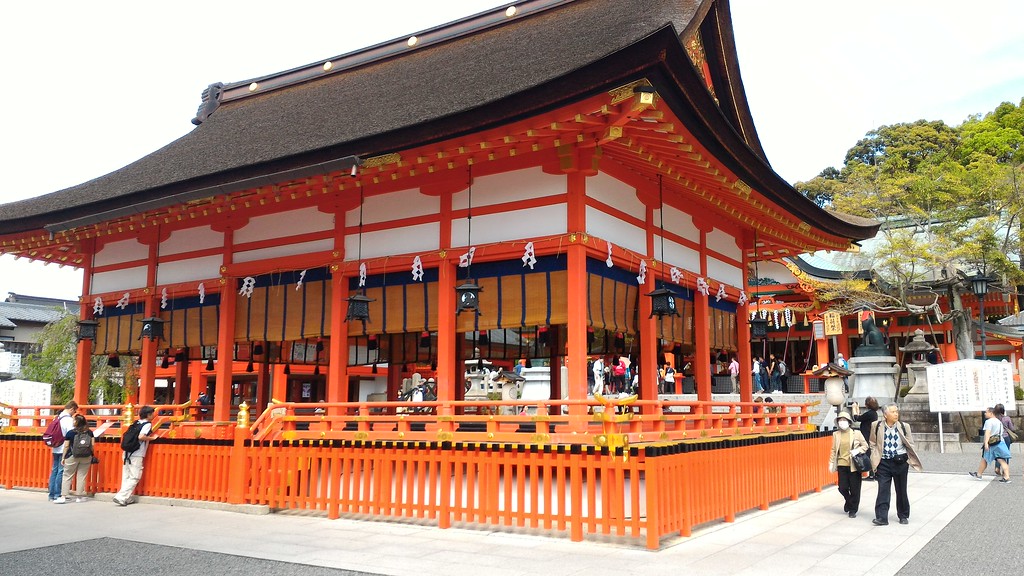 Just to the right of the dance stage, you will see a small subshrine called Higashimaru-jinja Shrine (東丸神社). Go in and check it out. 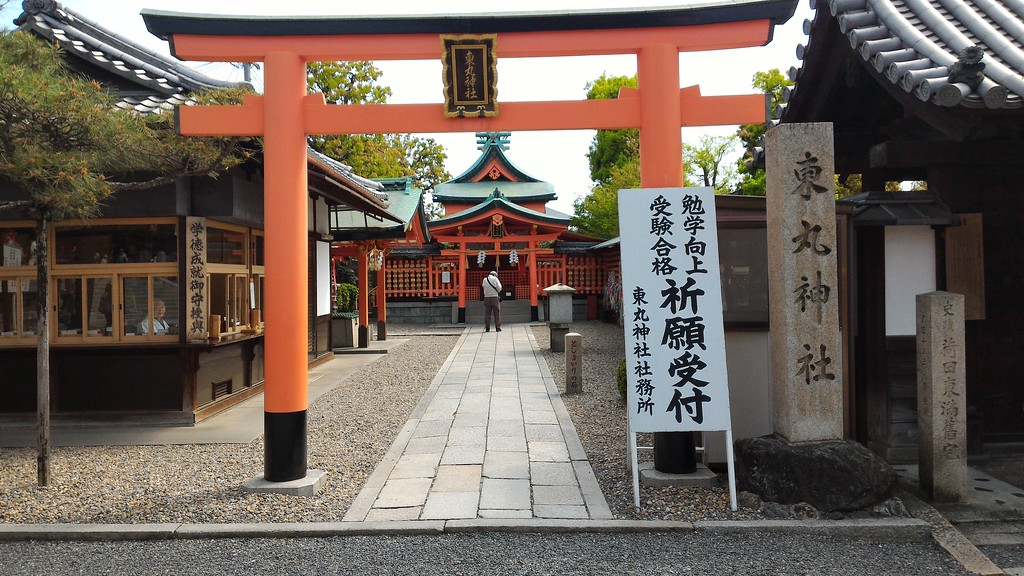 This shrine is where people come to pray for academic success. Students hoping to pass an entrance exam sometimes fold 1,000 origami cranes. There is a belief in Japan that if you fold 1,000 origami cranes, you wish will be granted. Cynical people might wonder if the time might not be better spent actually studying. Whatever the case, the cranes are beautiful.

After checking out Higashimaru-jinja, make your way to the main hall of the shrine, where people pray and toss money into the collection boxes. If you come here near New Year’s, this area will be packed and the air will be full of money flying into those boxes. This hall is called the “Haiden” in Japanese.

To the left of the main hall you will find a table with wooden cylinders on it. These contain wooden sticks that bear numbers on them. People shake out a stick then report the number to the people working at the nearby shrine office. They then pay Y200 to receive the paper fortune corresponding to that number. The fortunes range from great luck to bad luck. If you get a bad one, don’t worry: you can just hang it up and the wind will blow away the bad fortune. You’ll see the bad ones hanging from special racks nearby.

You can also buy amulets at the shrine office. 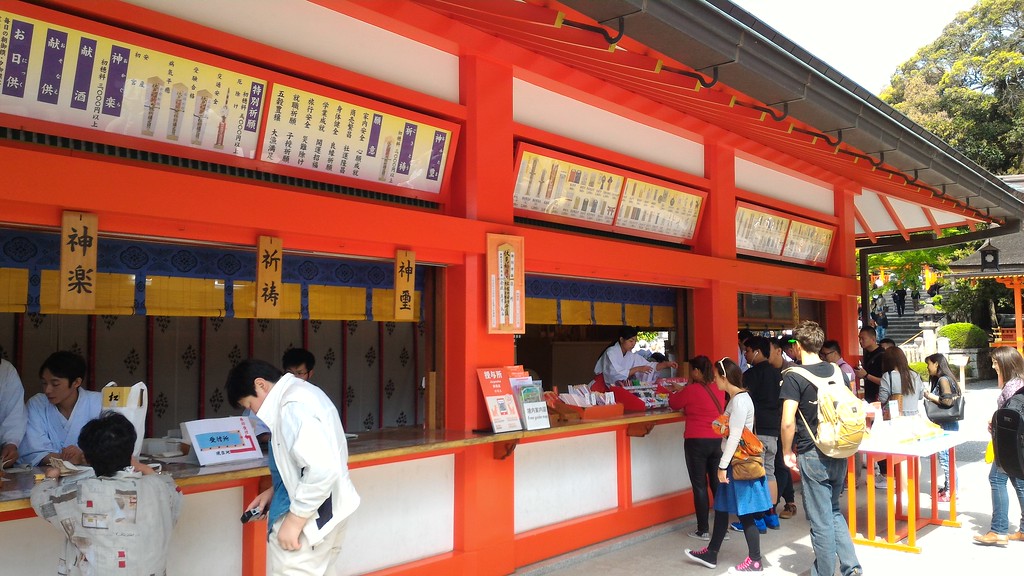 While at the shrine office, you can pick up a map of the lower shrine area. 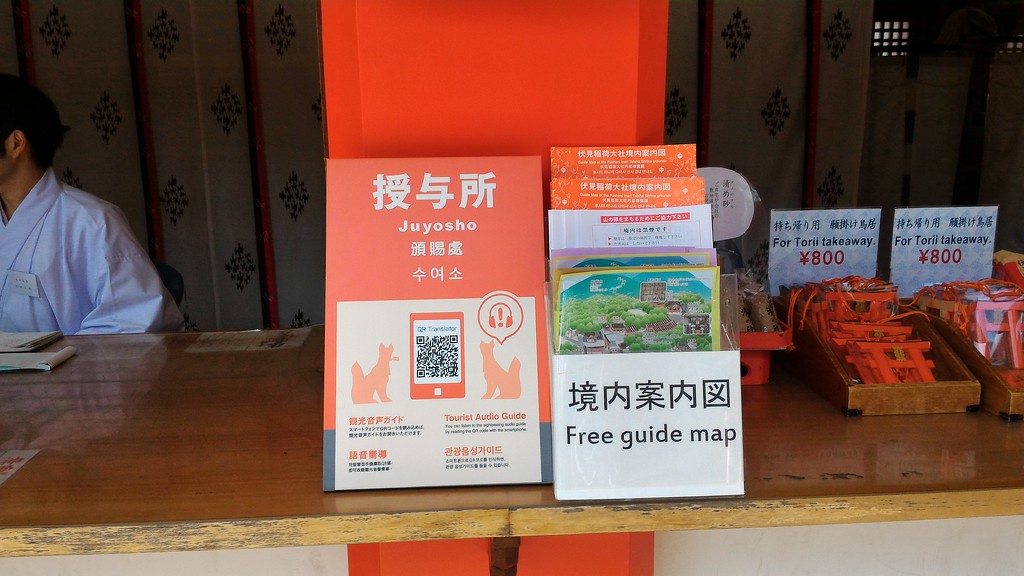 Just past the shrine office, you will see a flight of steps. Climb this to get to the inner shrine. 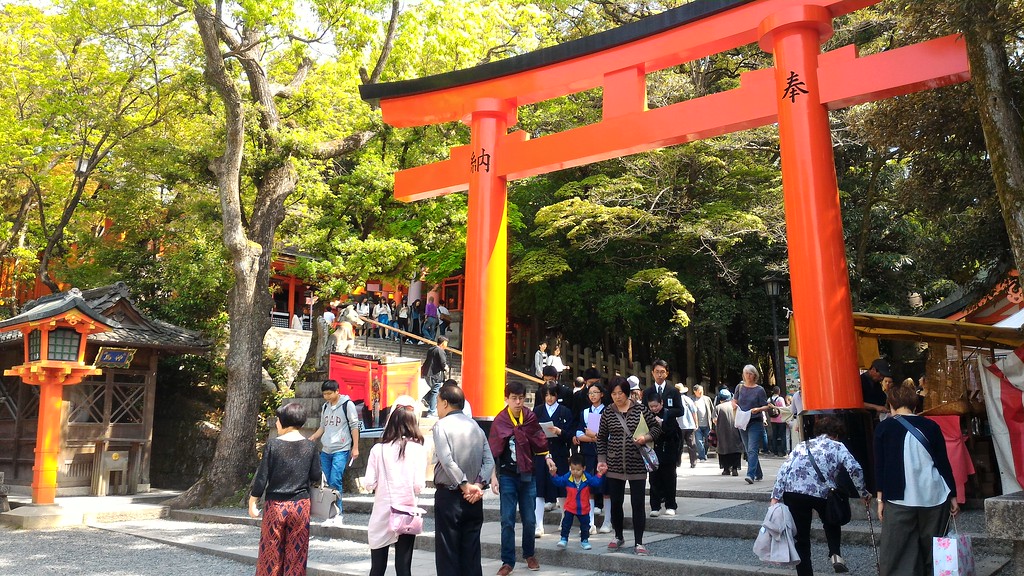 The way to the inner shrine takes you through an especially impressive arcade of torii known as “Senbon-no-torii” (one thousand torii). This section can be very crowded, so be patient. And look out for the social media addicts with their selfie sticks.

You’ll soon get to the inner shrine. Behind and to the right of the main hall of the inner shrine, you will see two stone lanterns holding round rocks. These rocks are the Omokaru Ishi. There is often a line in front of each rock.

These rocks are an unusual way of making a wish. People make a wish and then try to lift one of the rocks. If the rock is lighter than you expect, your wish will come true. 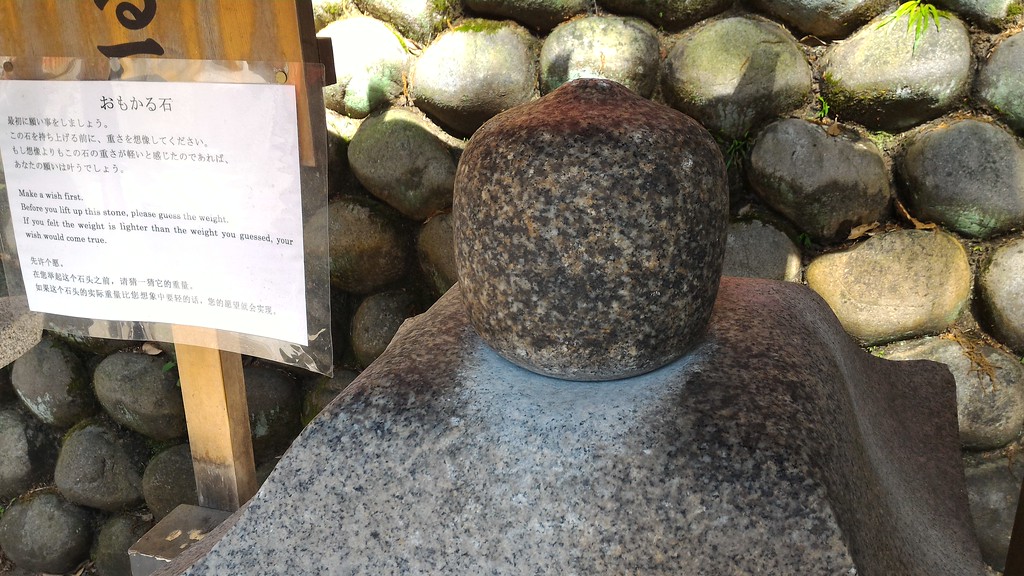 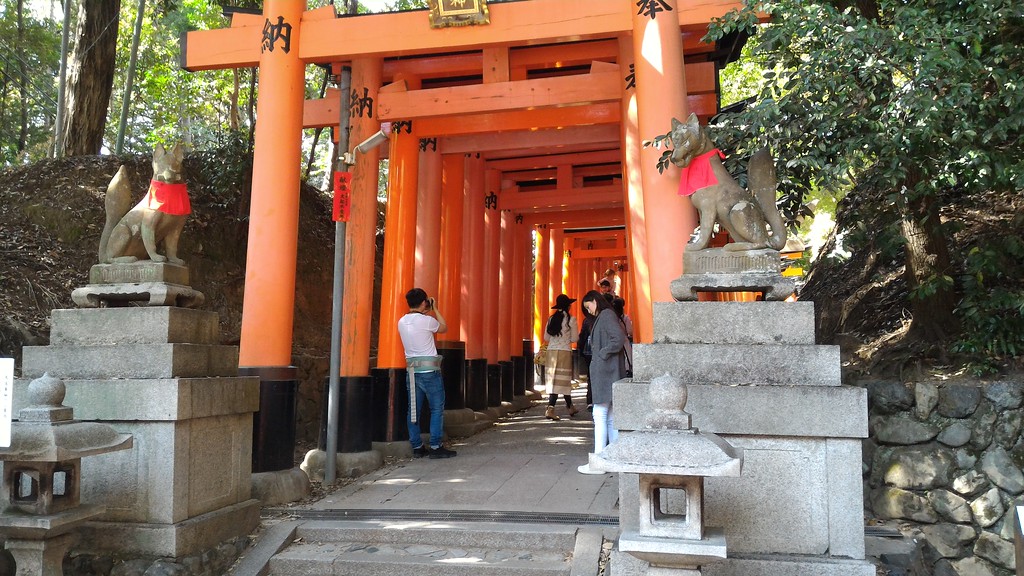 A short walk brings you to a junction with several signposts. If you go left here, you will return to the main hall. But, you want to go right and continue to the upper shrine.

After walking through some arcades of very large torii, you will reach the base of the first climb. Climb these steps.

At the top of the steps, you will reach Shin-ike Pond.

Take a right at the pond and continue climbing through arcades of torii. 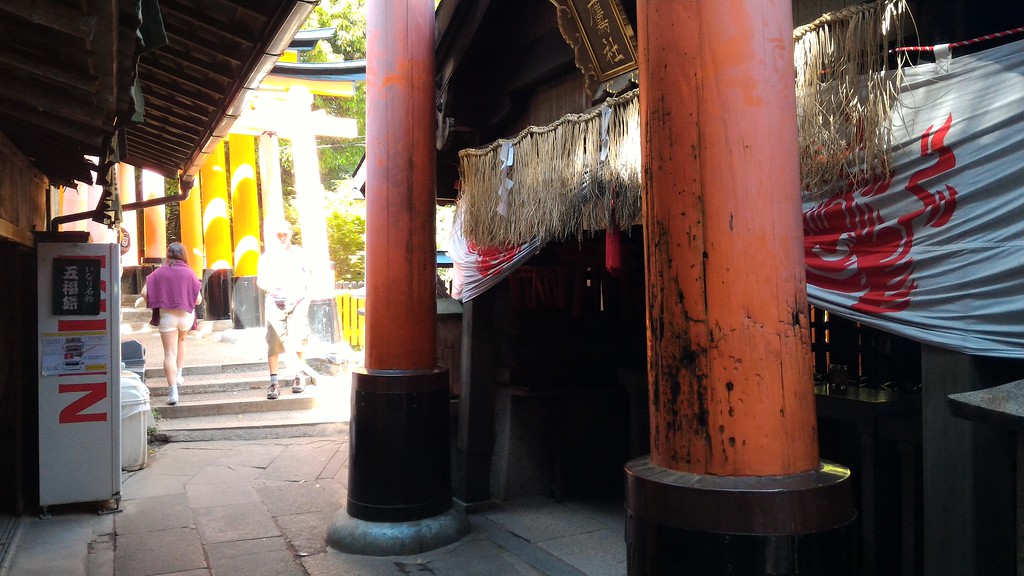 After a bit of climbing, you will reach a trail junction called Mitsu-tsuji (三ツ辻). Go right here and continue climbing. You will climb several flights of steps through torii arcades, passing by some simple teahouses.

After about five minutes of climbing, you will arrive at a major trail junction with two teahouses and a great view over southern Kyoto. This is Yotsu-tsuji (四ツ辻).

The view from Yotsu-suji takes in all of southern Kyoto and extends down to Osaka. You can take a well-earned rest hear and buy something to drink if you wish.

The trail to the summit starts between the two teahouses on your right (as you ascend).

After a short climb, you will come to Shimo-no-Yashiro Shrine (下之社). 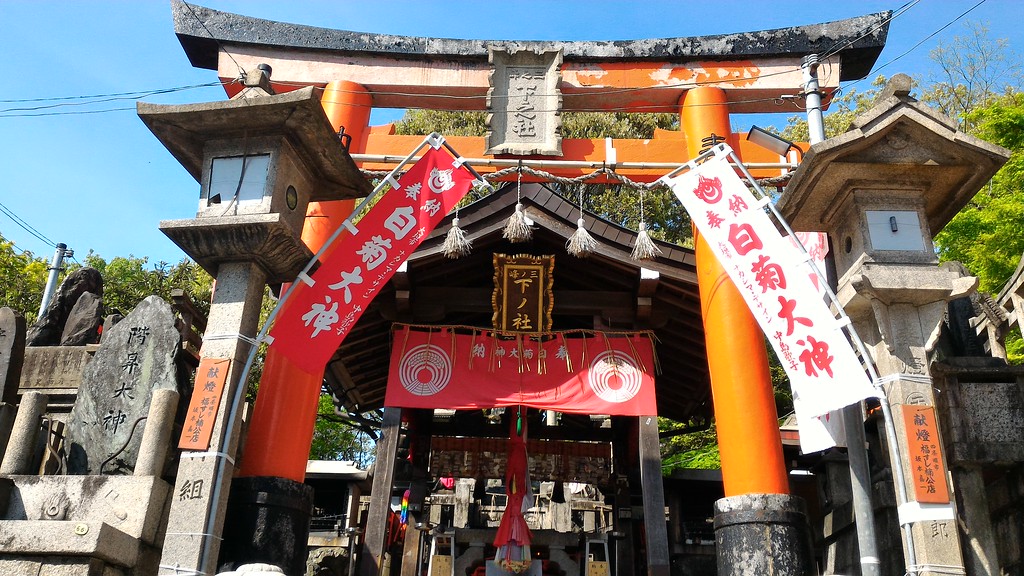 A final climb brings you to the true 233m summit of Mt Inari-san, which is topped by Kami-no-Yashiro shrine (上之社).

After taking a rest at the top, continue in the direction you were traveling, over the summit and down the other side. A short walk down the steps brings you to Mitsurugiya (御剣屋), another small shrine complex.

Another short walk brings you to the shrine grotto of Yakurikisha(薬力社), which is a magical little spot. 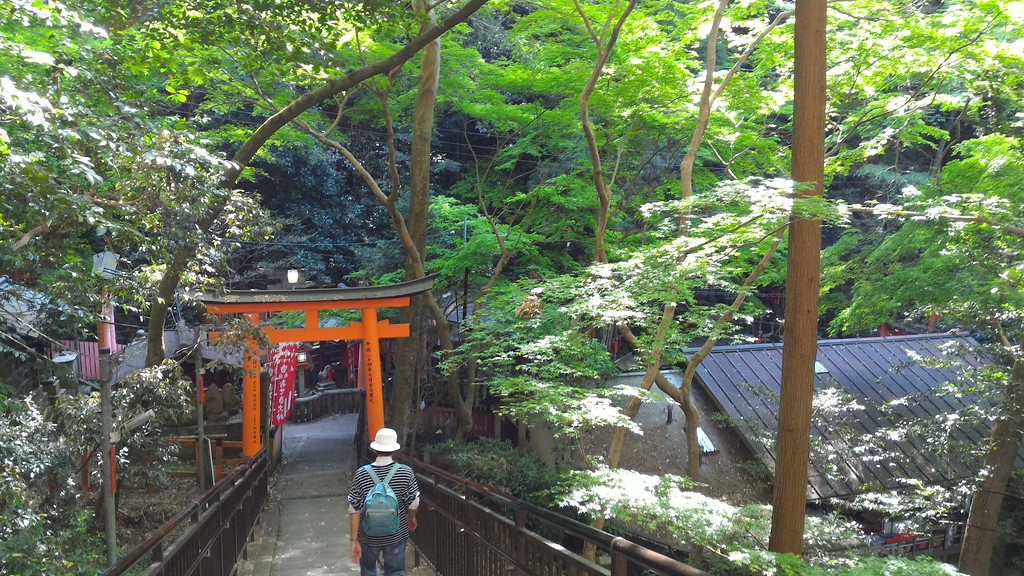 There is a waterfall at Yakurikisha where ardent pilgrims pray while standing under the cold water. Note that this is for serious Shinto worshippers, not hot hikers looking to cool off. 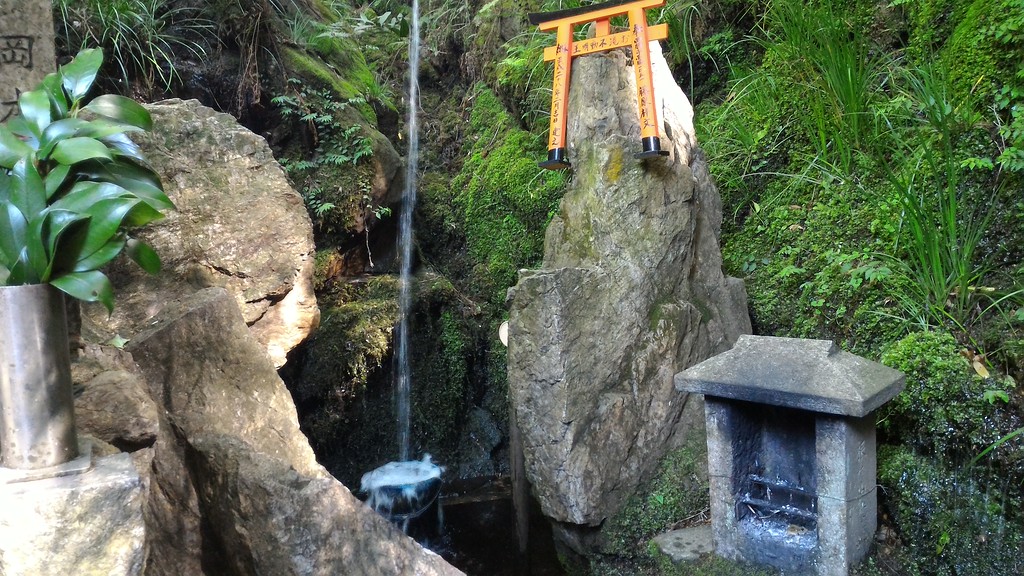 Be careful when continuing on from Yakurikisha: In order to get back to the main hall and the proper end of this hike, you want the trail on the left that continues slightly uphill; you do not want to go downhill as this will take you out at the wrong place. The tourists in this picture are going the wrong way.

A very pleasant bit of walking brings you to the next shrine: Gozen-dani (御膳谷). The junction here is a little confusing. Keep going straight until you find yourself in front of the wide shrine office. The route continues straight and level past this (ie, do not go downhill from here).

This is the shrine office at Gozen-dani. The trail continues past this, on the level. 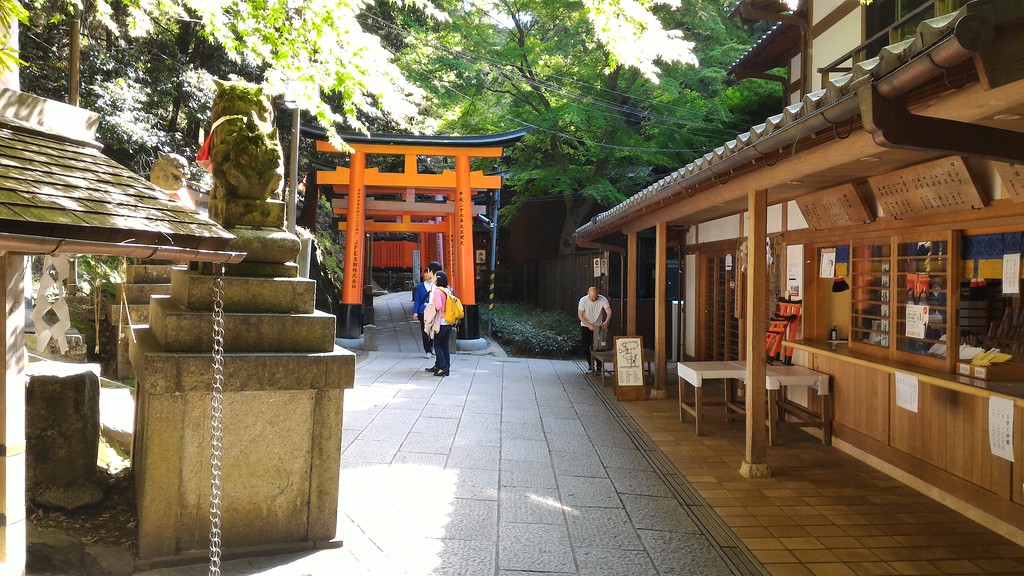 The trail that descends from Gozen-dani is the wrong way. It’s a nice trail, but it won’t take you back to the main hall!

There’s a good map of the whole pilgrimage circuit here at Gozen-dani.

Continue past Gozen-dani and after about 100m, you will find yourself back at Yotsu-tsuji. Now, the walk back simply involves retracing your steps to the main hall. Note that you probably don’t want to go back to the inner shrine and Senbon-no-torii, so when you get to the arcade of torii below Shin-ike Pond, go straight on and you’ll eventually get back to the main hall.

Back at Yotsu-suji – image © Chris Rowthorn

There is just one place where you must be careful on the way back. When you get to Mitsu-tsuji, be sure to go left and down the steps. If you go straight on, it is a very winding route back to the main hall. All the people in this picture are going the wrong way. You want to take a hard right down the steeper steps.

About five minutes of easy downhill walking from Yotsu-tsuji brings you back to the main hall of Fushimi-Inari-Taisha Shrine, from which you can easily access the Keihan or JR stations.

Here is a Google map of the Fushimi-Inari hike route. Note that the GPS track is a little inaccurate, but it gives you the basic idea.