For five lively days in January thousands throng to a small shrine in Gion to pray to Ebisu, the god of good fortune. This past January Michael Lambe of Deep Kyoto joined the bustling crowds for an in-depth look at Toka Ebisu’s traditions. 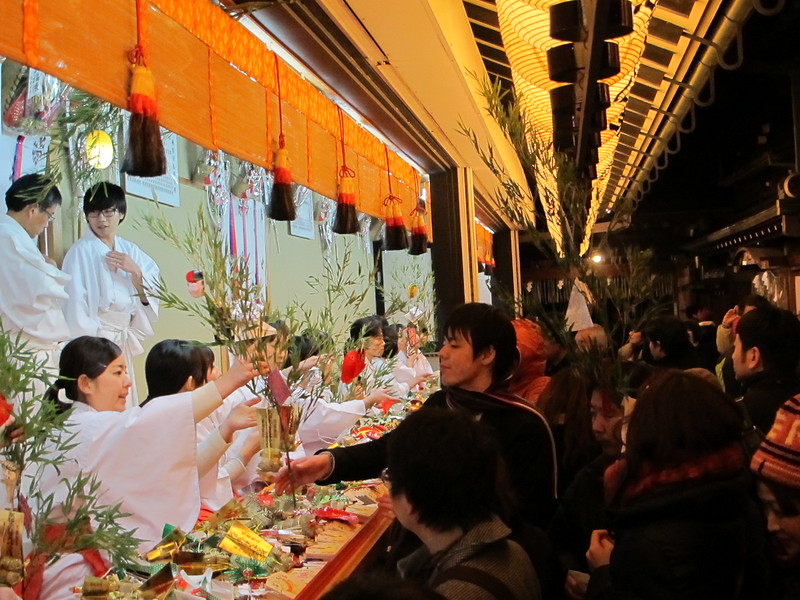 The first major festival of the year in Kyoto is Toka Ebisu. “Toka” means the tenth day, and Ebisu is the god of good fortune and prosperity. Though centred on the 10th of January, this festival actually lasts for five days from the 8th until the 12th. During this time thousands of visitors crowd into Ebisu Shrine to conduct a simple ritual of prayer for ongoing success in their work and business.

Many people buy branches of lucky bamboo grass, called Fuku-Zasa which has been blessed in a special ritual by a shrine maiden. They then buy more lucky charms and talismans, which they attach to the bamboo branch. These charms come in all kinds of designs, but two of the most common are treasure boats for wealth and red sea bream for future success.

When you reach the main altar, throw a coin into the donation box. A five yen piece is considered lucky but any coin will do. Step back and then perform the following simple ritual.

Up until recent years, visitors to the shrine would ring the bells at the altar after throwing their coins. However, the shrine became so crowded with pilgrims who were all trying to pull the bell ropes at once, that accidents inevitably occurred. For safety reasons the bell ropes are now removed during the festival, but if you visit the shrine at other times you can still ring the bells. 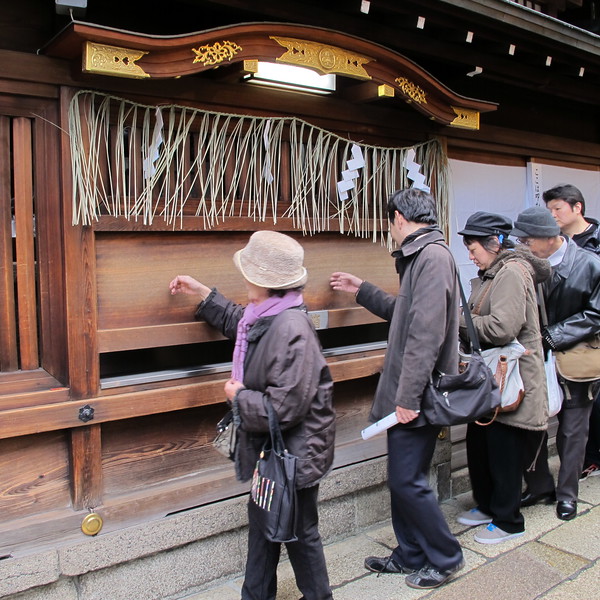 Ebisu is thought to be hard of hearing, so after praying people file past a wooden board to the left of the main altar and knock on it as they go by. This is said to wake Ebisu up and get him to pay attention to your prayers. Obviously, some people knock on the board a little too enthusiastically as a sign by the board asks that people tap the board gently! 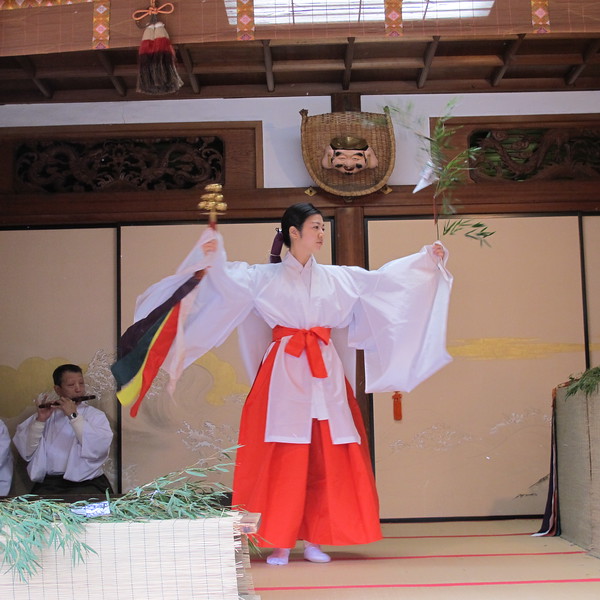 Throughout the festival, shrine maidens perform a ritual dance called kagura. This simple dance to pipe and drum has its roots in ancient shamanic rites held to summon the gods. At Ebisu Festival it is performed to purify and bless the lucky branches of bamboo grass. When sales of these branches are slow, the dances take place every fifteen to twenty minutes, but as the shrine gets busier the dance is performed almost continuously. 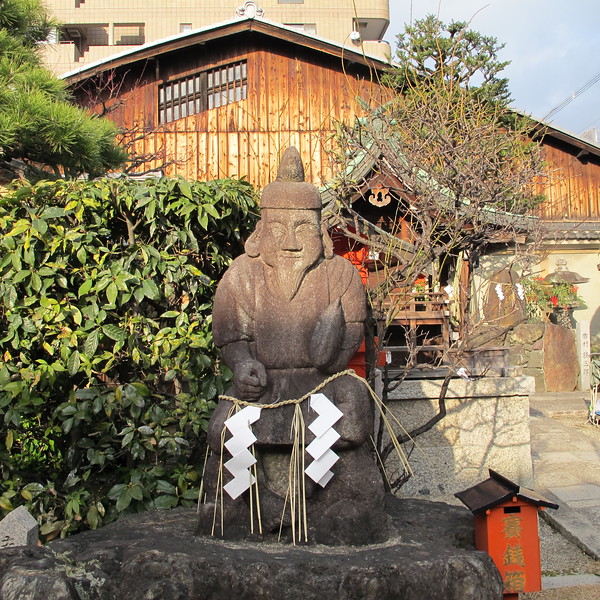 Ebisu is one of the Shichifukujin, the Seven Lucky Gods of Japanese folklore, who are traditionally associated with the New Year. He is however, the only one of these gods whose story is homegrown Japanese. The other six gods all originate from China and India. You can see the image of Ebisu dotted around the shrine, whether in stone carvings or on the various goods on sale. He is always shown laughing and he often holds a rod and fish, usually a red bream which is associated with celebration. The story of Ebisu is particularly inspiring, as he wasn’t born lucky and he overcame much hardship to become one of Japan’s most popular gods.

Ebisu dolls on sale at the festival – image © Michael Lambe

According to medieval legend, Ebisu was born so terribly deformed and handicapped that his own parents rejected him. Cast out to sea in boat woven from reeds the poor infant was discovered by a fisherman who raised him as his own. Despite these hard beginnings he grew strong under the care of his adopted family and though he still walks with a limp, and remains hard of hearing, he never stopped smiling and laughing. Now he is considered a god of good fortune and appropriately the patron of fishermen, workingmen and children. By overcoming adversity with cheerful perseverance Ebisu sets a good example to those who would make their own good luck by working hard with a positive attitude.

Throughout the festival there are a number of special ceremonies and events. I visited the shrine several times in order to see as many as possible! 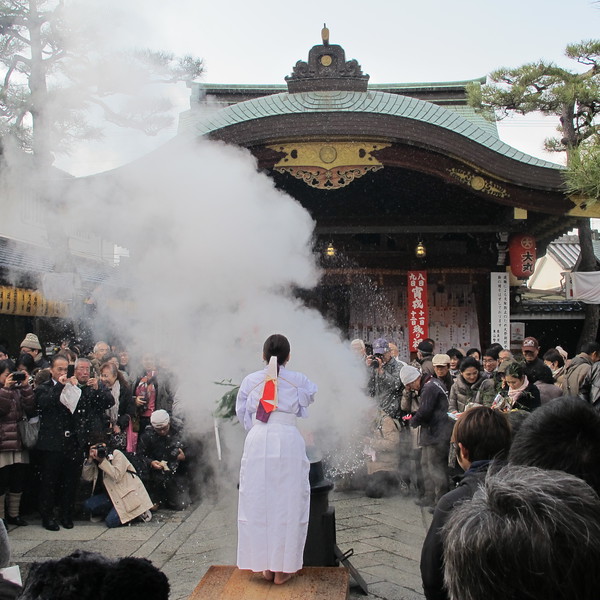 This mysterious ritual takes place at 2 o’clock on January 8th and this year, I got to the shrine just in time to witness it. Yudate means “boiling water”. In this ritual, water is boiled in a large pot placed before the altar. A shrine maiden then performs a ritual kagura dance before dipping bamboo grass in the boiling water and sprinkling it over the crowd with a series of quick, compact motions. 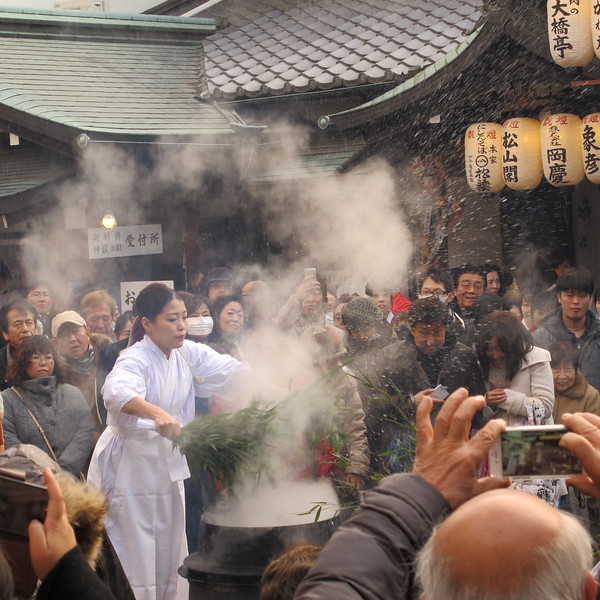 The Yudate is a purification rite with its roots in ancient shamanic divinatory practices, and the sight of steam rising in a column before the altar as musicians play on pipe and drum certainly creates an uncanny atmosphere. To get a good view, get there early, as a crowd quickly gathers when the ceremony begins. Be warned though: those closest to the shrine maiden, do get very wet! 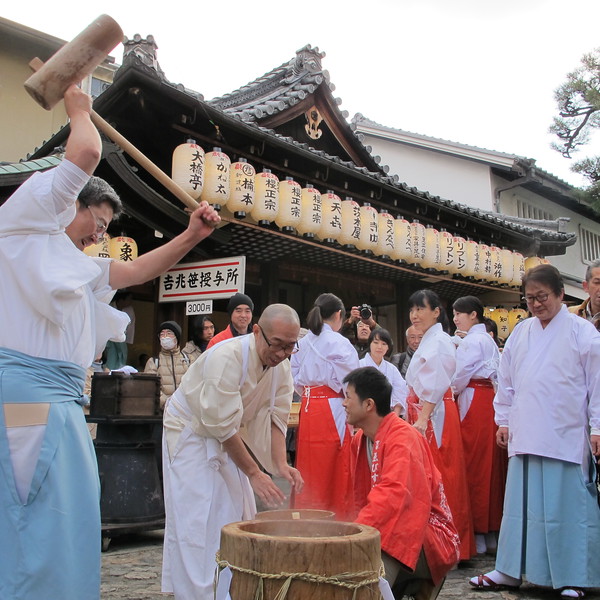 Shortly after the Yudate Ritual, Mochi-tsuki, the Rice Pounding Ritual, begins. Mochi rice cakes are a traditional food of the Japanese New Year. Though factory made mochi cakes are now commonly available, the traditional method of making them is still celebrated in ceremonies around the country.
*First, rice is soaked overnight and cooked.
*The rice is then placed in a mortar and pounded with a wooden mallet.
*While one person pounds the rice, another turns and moistens the mochi.
*The sticky lump is then given to shrine maidens who shape it into rice cakes. 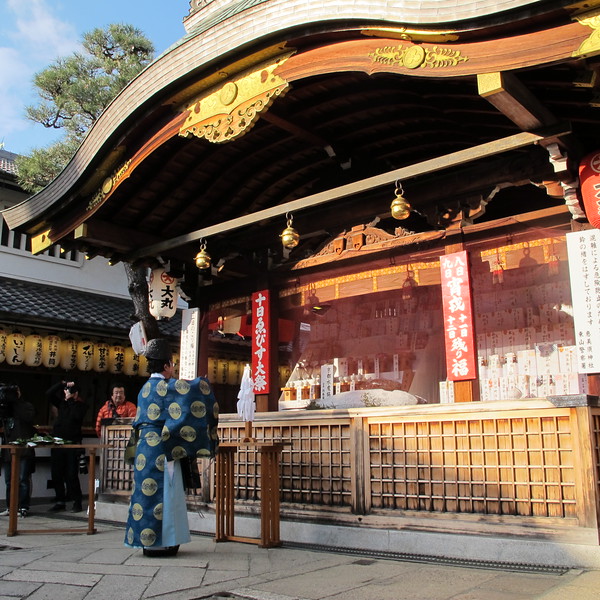 This takes place at 9 o’clock on the morning of the 9th. Representatives of the local fisheries association line up in front of the main altar alongside shrine maidens in order to pray for an auspicious new year. A shrine priest then conducts a special ceremony in which a 150kg maguro tuna is dedicated to the god Ebisu. 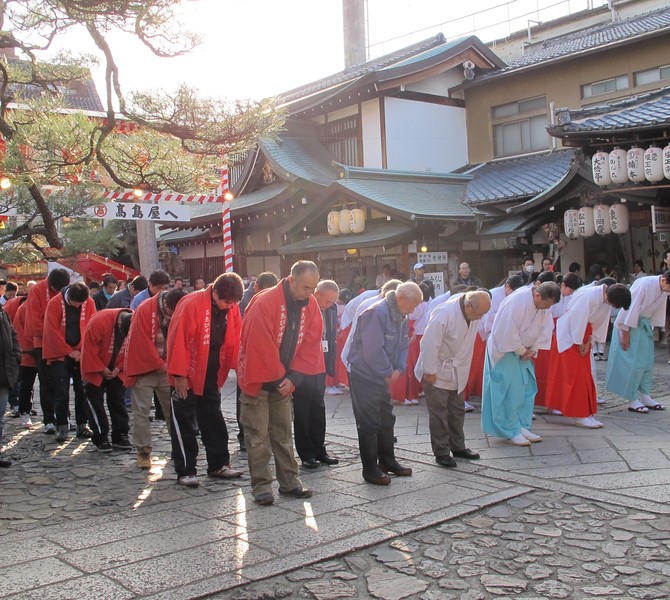 Historically Kyoto was not known for its seafood, because it is landlocked and far from the sea. All that has changed however, thanks to refrigeration. This giant frozen tuna fish on Ebisu’s altar is symbolic of just how important the marine products industry is to Kyoto today. And of course Ebisu himself has a special place in his heart for fishermen. Remember that when you take your next bite of sushi!

This actually takes place twice, at 10 o’clock on the morning of the 8th and 9th of January. Performers from Toei Kyoto Studio Park enter the shrine dressed in Edo era costumes, complete with top-knots for the men. In the parade are colorful palanquins carrying actresses dressed as Geisha. The parade moves surprisingly fast, so if you want a good view get there early and stand closer to the main altar. This year, I made the mistake of standing near the gate and the parade was quickly swallowed up in the crowd.

The tradition of a parade dates from Edo times when rich merchant patrons would bring their favorite geisha to the shrine. With the fluctuating fortunes of the geisha districts the practice disappeared, but it was revived again in the 1970s with the help of the Toei movie company. 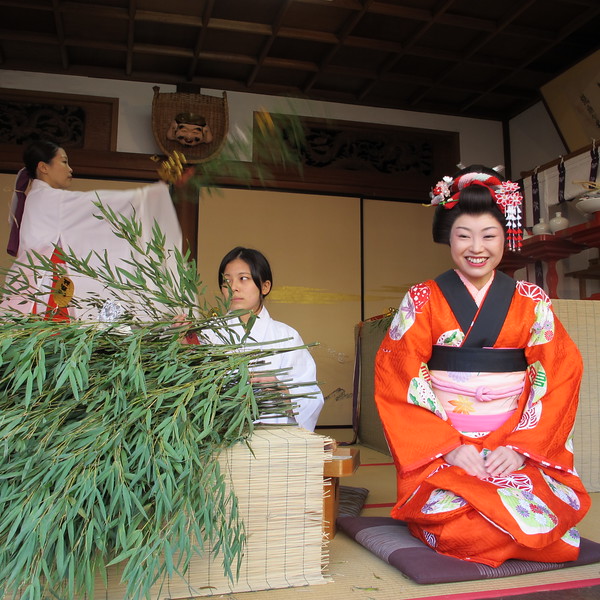 On the 10th of January these actresses will give out lucky bamboo grass at the shrine. Some might think it strange that actresses should dress as geisha in the heart of a real geisha area. However, Japanese film has deep roots in Kyoto. Japanese cinema was born here over a hundred years ago and the film industry still plays an important role in the local economy. It seems fitting that its representatives should also play a part in this celebration. 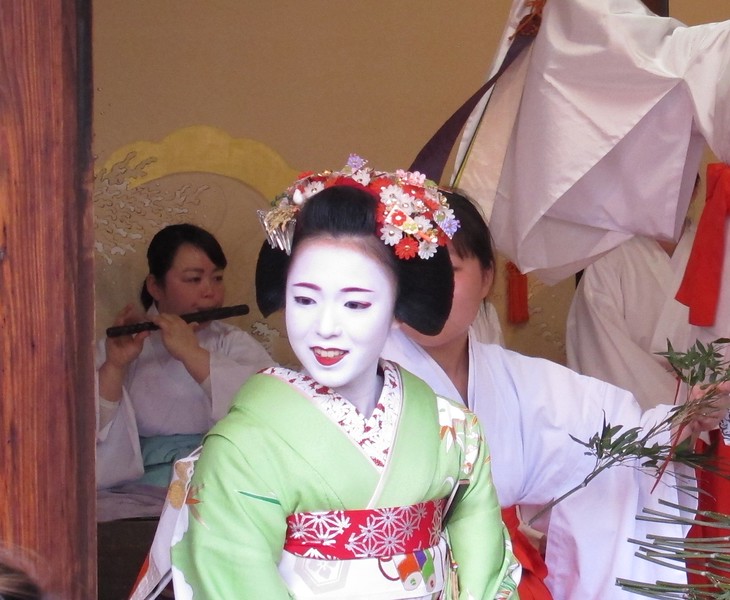 A maiko from the Gion district – image © Michael Lambe 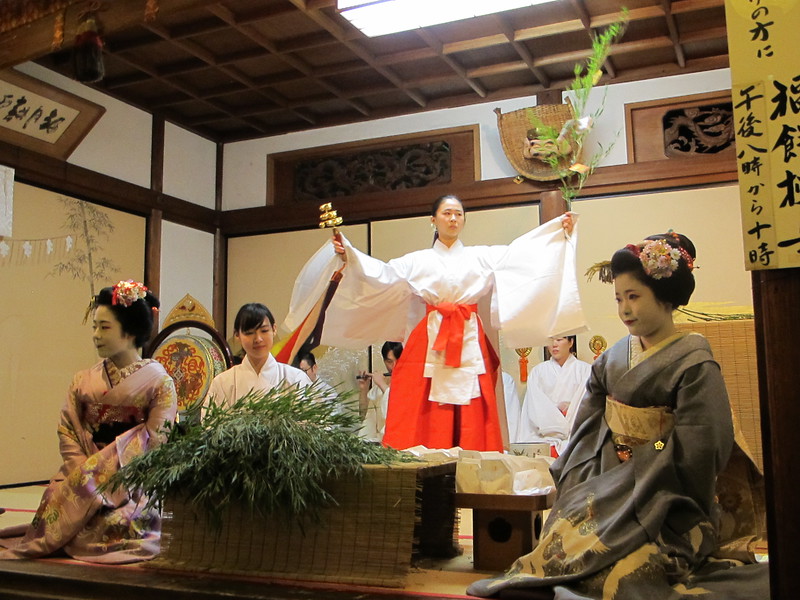 It’s so busy that the shrine maidens have to take turns in a non-stop kagura dance performance so that all the branches are blessed! When I went in the afternoon, the space before the hall was packed with a frenzy of photographers all desperately trying to get that perfect maiko shot. In the evening, though it was still busy, it was definitely calmer, and one friendly lensman even offered me his space at the front. 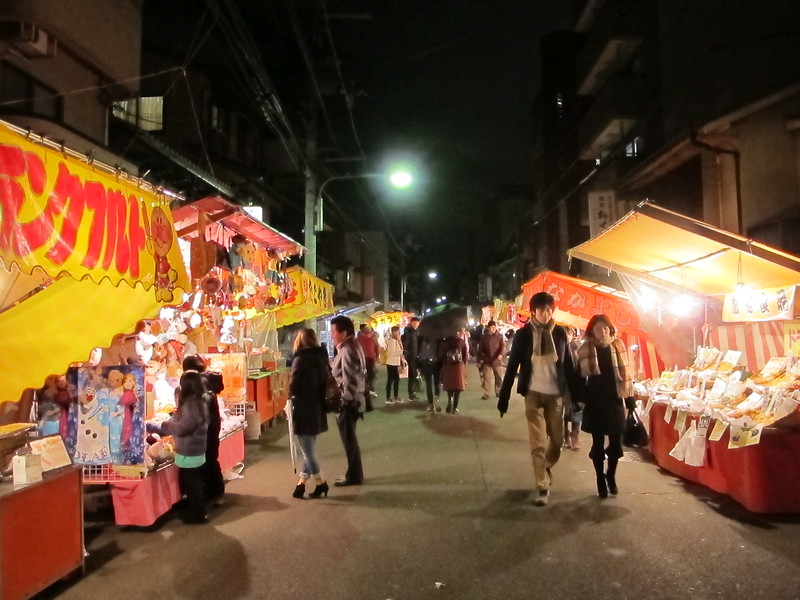 My favorite part of this festival is simply wandering by the festival stalls that line the streets leading to Ebisu Shrine. All kinds of cheap goods are on offer and plenty of food and drink. When night descends the streets seem to come alive with illuminated colourful stalls selling tako-yaki octopus dumplings, kara-age deep fried chicken, and ringo-ame candy apples. Local restaurants are also busy with hungry pilgrims. Some stalls sell hot sake, and others sell hot wine. Truly, for a little while, Ebisu has brought good cheer and prosperity to this area at least.

How To Get To Toku Ebisu

Leaving Keihan Gion-Shijo station head east on Shijo street. On the south side of Shijo is the entrance to Yamato-Oji Street, marked by a huge banner for Toka Ebisu. Turn right here and follow the street stalls all the way down until you reach Ebisu shrine.

Ebisu Shrine holds a second similar festival on the 19th and 20th of October called “Hatsuka Ebisu”. Hatsuka actually means “20th day”. This festival has its roots in Edo times when merchants travelling back from Edo (modern Tokyo) would give thanks at the shrine for a safe and successful journey. People still give thanks here, and pray again for their businesses and for safety in their homes.