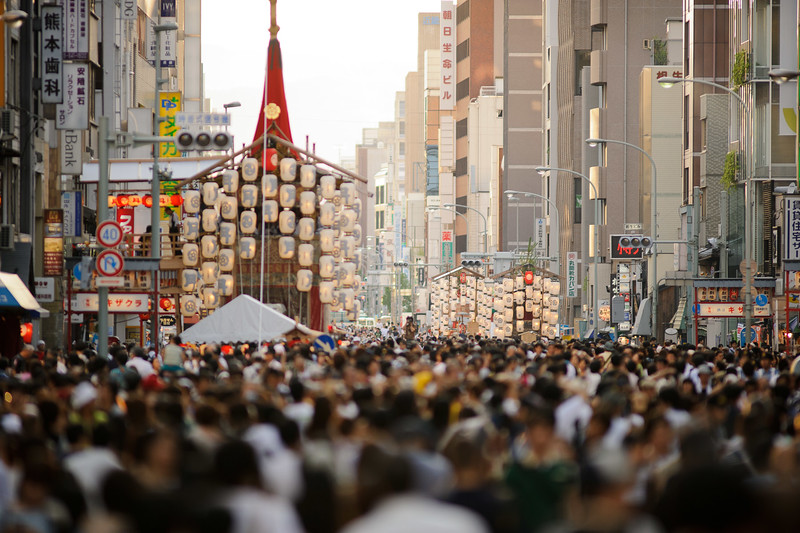 The Gion Matsuri is not just Kyoto’s biggest festival – it’s one of Japan’s biggest annual events. Originally held to pray for deliverance from plague, the festival has evolved into a huge celebration of Kyoto culture. It’s also a huge summer block party in which locals and visitors gather to promenade in colorful yukata robes and gorge themselves on street food and beer. The main events are two processions of traditional parade floats, held on 17 July and 24 July.

However, for visitors, perhaps the most enjoyable part of the festivals are the “Yoi-yama” events held on the three evenings preceding the main float processions. This is when Kyoto really lets loose. If you can lay your hands on a yukata why not get dressed up and enjoy the fun? On this page, I’ll give you all the details on the festival and advice on how to enjoy it. Before you read any further, note that you will have to reserve accommodation months in advance if you hope to stay in Kyoto when the festival is on.
:: Check availability and pricing for hotels in Kyoto Booking.com or Agoda.com.

The Gion Matsuri is a month-long series of events. However, many of the events are relatively small and of only local interest. The events of most interest to travelers are listed here. For a map of the float procession routes, see this route map.

The Gion Matsuri is centered on a collection of 32 magnificent parade floats known collectively as “yamaboko”. Of these, there are 9 enormous “yama” floats and 23 smaller (but still grand) “hoko” floats. Some of the yama weigh as much as 12 tons and soar to 25 meters in height (when measured to the tip of their long central poles). The floats are built of superbly crafted wood and decorated with sumptuous Nishijin textiles. Resting on wheels as large as a man, each one is a movable collection of some of Kyoto’s finest craftsmanship and artistry. It takes a team of dozens of men to pull each float. Floats are maintained by neighborhood guilds. Men from the various neighborhoods (and a few lucky “gaijin” friends) pull the floats through the streets on the procession days. On the days preceding the processions, you can get a close look at each float as you walk along Shijo-dori Street and the nearby streets. Most are clustered near the Shijo-Karasuma intersection. 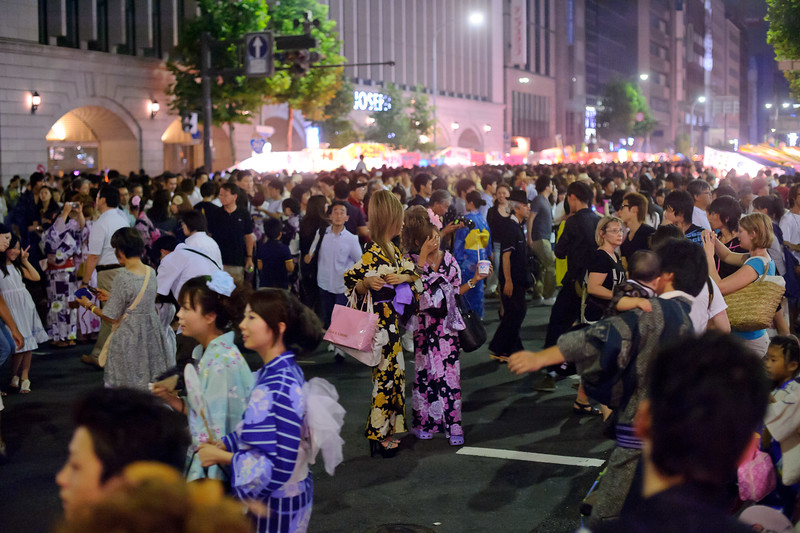 A few days before each procession, the yamaboko are brought out of warehouses and assembled in designated spots on the major downtown streets of Kyoto (the main one being Shijo-dori Street between the Kamo-gawa River and Horikawa-dori). On the three evenings before each procession (14/15/16 July and 21/22/23 July), these streets are closed to vehicle traffic and people promenade around the yamaboko carousing, eating and drinking. These events are called Yoi-yoi-yoi-yama, Yoi-yoi-yama and Yoi-yama, respectively. Many young ladies and some young men wear light cotton yukata robes, which makes these events very picturesque.

Some of the oldest families in the area open the front of their traditional machiya houses or shops to display their treasures to the public during this time. You cannot enter the houses, but you can admire the treasures from outside. Here is where you’ll really get a sense for Kyoto’s old culture. The action starts each evening about an hour before dusk and continues until around 10pm. The best plan of attack is to take the Karasuma subway line to Karasuma Station or the Keihan line to Kawaramachi Station.

Starting at 9am on 17 July, 23 of the huge yama and hoko are hauled from their staging places around the Shijo-Karasama intersection east along Shijo-dori, then north along Kawaramachi-dori, before turning west on Oike-dori. The official endpoint is at the Oike-Karasuma intersection. The procession ends around 11.30am. There are official viewing stands on Oike-dori, but there’s no need to try to get tickets to one of those. You can watch the procession at any point along the route. Perhaps the most interesting places to watch are near the corners, where you can observe the painstaking process of making these massive floats change direction. The route for this procession is indicated in gold on this map.

The Ato Matsuri (After Matsuri): The Float Procession of July 24 (Ato Matsuri Junko)

In 2014, for the first time in almost 50 years, a second float procession was held. This second procession is known as the “Ato Matsuri,” which means “After Matsuri.” The event will now be held annually. This is a smaller procession in which only 10 of the yamaboko are pulled through the streets of downtown Kyoto. In this event, the yamaboko are pulled along a route that is the reverse of the main procession’s route. The procession starts at 9.30am and ends around 11.30am. The route for this procession is indicated in green on this map. Fewer people attend this event, which makes it a pleasant experience for those who are averse to crowds.