New Year’s is the most important festival/holiday of the Japanese year. It’s like Christmas and Thanksgiving all rolled into one. This is the time when families gather to feast and visit their local temples and shrines to pray for good fortune in the coming year.

This makes New Year’s a fantastic time to be in Kyoto, but keep in mind that some places will be closed (see the What’s Open and What’s Closed on New Year’s in Japan? section below).

What To Do on New Year’s in Kyoto

Japanese traditional New Year’s dish
For Japanese, the most important part of the New Year’s holiday is gathering with the family to have a special feast or feasts, often held on the evening of December 31st and during the day on January 1st. Unless you’re lucky enough to have friends in Kyoto, it will be tough to join such a feast, but you can sample the special Japanese New Year’s cuisine, known as o-sechi ryori, by stopping by one of the department stores and purchasing a ready-made assortment that you can eat at your lodgings. Takashimaya, Daimaru and Isetan department stores are all good places to pick up some o-sechi ryori.

Another option on New Year’s Eve is to head to a luxury hotel and eat a bang-up meal at one of their on-site restaurants. A good choice for this would be the Hyatt Regency Kyoto or the Westin Miyako Hotel Kyoto. 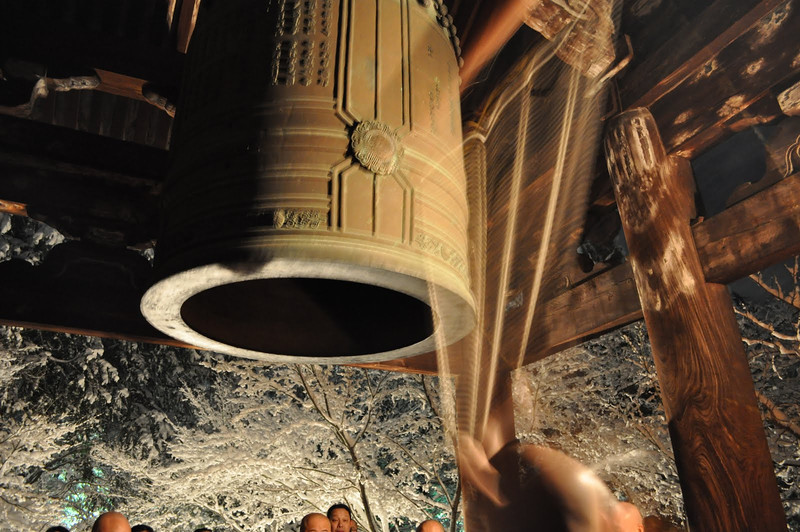 After feasting on New Year’s Eve, many Kyotoites head to their local temple to perform joya-no-kane, a sacred bell ringing ceremony. Here, people line up to ring the giant temple bells and wish for good fortune in the New Year (and to get rid of bad karma from the old). Technically, the bells are supposed to be rung 108 times, a number symbolizing the sins to which the flesh is heir, but many temples will allow everyone a chance to ring the bell even if it exceeds this number. Here are some good spots to participate in or observe joya-no-kane:

Chion-in: This vast temple houses Kyoto’s largest temple bell in a special enclosure above the main precinct. The bell is rung by a team of 17 monks, who fall with all their weight on ropes to swing the massive log-like clanger into the bell. If you want to see this, you’ll have to go very early and stand in line.

Nanzen-ji Temple: If you’re willing to stand on line, you can take a turn ringing the bell at the atmospheric bell tower of this fine Zen temple.

Kurodani Temple: Located on a hill above the city, the night view alone here is worth the trip. If you get here about an hour before midnight, you’ll have a chance to ring the bell with the locals.

Shinyodo Temple: This lovely temple in Sakyo-ku is very popular with Kyoto’s expat community as a place to ring in the New Year. The monks here serve hot medicinal tea to visitors, who then stand on line to ring the bell. I once spent a magical New Year’s Eve here waiting to ring the bell in deep snow

Heian Shrine
After ringing the bell at the local temple, many Kyotoites head to their local shrine or one of the city’s grand shrines to perform hatsu-mode, the all-important first shrine visit of the New Year. Those who don’t visit a shrine on the evening of December 31st will almost always go on January 1st, 2nd or 3rd. Once at the shrine, Kyotoites will stand on line to ring the bell and say a prayer for a good New Year. Foreign visitors are more than welcome to join the queue and say a prayer. Some shrine-goers will also draw an omikuji (fortune) by shaking a numbered stick out of a special container and telling the number to the waiting attendant who will hand over the corresponding fortune (this costs Y100). Some shrines serve special sweet alcohol-free sake called amazake to their guests on New Year’s Eve, and this is a great way to beat the chill.

If you’re in Kyoto on New Year’s Eve, I strongly recommend that you visit one of Kyoto’s grand shrines. They’ll all be packed with throngs of people, but this is part of the fun. Here are the big three:

Heian-jingu Shrine: The vast courtyard here can hold a lot of people, but it still gets crowded at this popular Northern Higashiyama shrine.

Yasaka-jinja Shrine: Sitting on a hill overlooking the Gion geisha district, bustling Yasaka-jinja is easily one of the most atmospheric places to ring in the New Year.

Fushimi-Inari-Taisha Shrine: What could be better than checking out the myriad tori (shrine gates) at this vast shrine complex on New Year’s Eve?

Where to Stay on New Year’s in Kyoto

Staying in a good Western-style luxury hotel is a good move if you’re in Kyoto over the New Year’s holiday. This is because many of the city’s restaurants are closed over New Year’s, but hotel restaurants usually stay open and you’ll be able to dine at your lodgings rather than traipsing all over town looking for an open restaurant. As mentioned above, Kyoto’s luxury hotels often serve special dinners on New Year’s Eve.

Some good hotels in which to stay over the New Year’s holiday include:

What’s Open and What’s Closed on New Year’s in Japan?

Finding Places To Eat In Kyoto Over New Year’s

Since many restaurants are closed over the New Year’s holidays, it can be difficult to find places to eat. As noted above, convenience stores and fast food restaurants stay open, so these are always a good bet. Hotel restaurants also stay open. Finally, these days, the Takashimaya and Daimaru Department stores only close on January 1st. Thus, you can buy food at their basement food floors from January 2nd, something that many Kyotoites do to tide them over until their local supermarket reopens, usually on January 3rd or 4th.